We decided to leave our paradise a little while ago for a vacation. This time we choose to go and visit Lisa in Virginia. I had never seen her there and neither of us had seen her latest apartment. Well we tossed a few things into our backpacks and food we didn’t want to throw away into a cooler and headed north. Since Charleston is about 1/2 way we said that is the area where we will stop for the night. The bonus was that our friend Norma lives there. We made arrangements to visit on our layover. It was going to be great to see Norma and catch up. We met Norma in Panama. She was a friend of a friend who became a friend. Cool how that whole friend thing works. Well just before we left to head north Norma contacted us and had to cancel getting together 😦 . I assured her that I did start to regularly bathe once we arrived back in the USA but she said she doubts that but had to cancel due to other reasons and we definitely need to plan another get together. “Norma, Oh Norma, where did our Norma go?” Hopefully we will see you soon.

We stayed in Charleston anyway and then drove on through to Virginia the next day. Besides getting to see and spend time with Lisa we had a laundry list of other things we wanted to do. It had been at least 30 years since I had spent any leisure time in the DC area. We had a number of old friends and a number of old places we wanted to see. After getting to Lisa’s place and the customary hugs, getting settled in her very nice apartment, meeting her roommate and the mother/daughter gap-fest we next got to go to the iconic Ned’s Irish Pub across the highway from her complex. I think Lisa goes to Ned’s for more than just Seahawks games. With just a slight nod as we came through the door the bar-keep began pouring her favorite brew. It was kind of like Cheers but Irish. The regulars new Lisa. During our trip I went back to Ned’s multiple times.

Since someone had to pay rent, Lisa went to work and Denise and I found things to do. Denise brought material to finish up a mosaic wine table for Lisa that she did not get done before we left. After she finished this up we took a day and went into DC. Lisa had a meeting in town so she dropped us off in the monument area. We saw all the old stuff – Lincoln, Washington, Jefferson but also got to see others that were newer like the Vietnam War Memorial, the monument to women in the military, the massive WWII monument, and the impressive Korean War Memorial. We walked to the Whitehouse for a quick greeting ceremony in the Rose Garden and then headed to the Air and Space museum on the green.

Things have really changed. It is a major production to get into the museums. There were long hot lines outside with each person being let in one at a time to go through the metal detectors and wands. We were beat from all the walking and hopped on the Metro Silverline at the Smithsonian Station to head back to Lisa’s for dinner.

Other great activities were that we were able to spend an afternoon with Denise’s brother Joe, wife Trisha and family at their place and then again a final dinner with them before we left. It was great to see them. I myself probably hadn’t seen them in 20+ years. The boys were probably just out of diapers then but now are men working on making it on their own. It was a wonderful visit.

I also caught up with an old old friend from College days. Chris drove out to meet me at Ned’s and we spent a couple hours picking up right where we left off – drinking and giving each other a hard time. Times do change. Last time I saw him the only women he knew had restraining orders against him and now he is married. Go figure! It was wonderful to get together.

We also met up with an old boss, mentor, friend and his family. I met Lloyd at grad-school when I was in the Army and was soon working for him on North Fort Lewis at ‘Testing and Experimentation Command Board’….don’t ask. He and his lovely wife had two very little boys – at that time. Well Lloyd went on to retire from the Army an 0-5 (he was/is certainly more of a masochist than I was), is now a high level civilian muckity-muck still doing work for the military, the two boys are…well…not boys, and his wife, Chom, is still as lovely as ever. They live way off the beaten path south of DC on a bluff overlooking the Potomac. Their own lil’ Mt. Vernon.

While on our trip they had us come out and go for a cruise on the Potomac with the family. It rained on us for a while which was great because it gave us lots of time to have some drinks and catch up while sitting below on the cruiser. When it cleared we went down river and anchored near Rick’s riverside bar where the water taxi came and picked us up for more drinks and food on shore. It was a great day.

It just so happened that two days before we were going to head back home Lloyd was having a 60th birthday celebration at their house with lots of folks, a keg of beer, an awesome pig roast and smoked chicken, some wonderful sushi, great kimchi, and all kinds of other food and deserts. Did I say beer? It was another great day with them and I left with my stomach 3 sizes larger than it has been in a long long time. Again it was so wonderful to catch up and we hope to see them in Florida for a beach vacation soon.

It had been well over a week and Lisa probably was sick of us and was ready to toss us out so we headed home to the beach.

We stopped off in Raleigh, NC to see an ole friend from Panama – Buz. We met Buz on our very first full day in Coronado as he walked into the local fonda for breakfast wearing his USC Gamecocks t-shirt. We became fast friends. Over more than a year we spent many many hours by the roof-top pool well into the night killing unselect brain cells. Buz was one of our close circle of friends we had in Panama. Buz introduced us to the earlier mentioned Carla – Friend of a friend, now a friend…. Buz keeps threatening to come to the beach for a visit and we are expecting him to fulfill that threat. 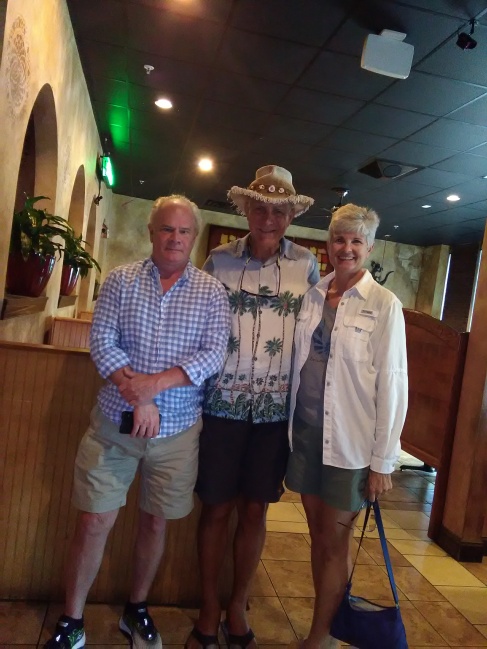 We have returned from our trip and have gotten back into our routine of  daily beach walks and swims in the pool, Friday’s at the Dive Bar, Monday’s at the Square Grouper, a minor league ball game, and a selection of other Tiki Bar Happy Hours. Remember, we are doing all this so you don’t have to. Keep working because we expect to collect our share of social security some day. Also beware, maybe our next spur of the moment vacation will be to your city and you will be expected to party and have fun!

As always, feel free to share or send a comment or question or hide from your children.